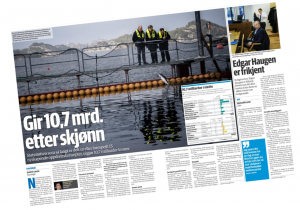 Norwegian fisheries authorities are in the middle of distributing state aid of 104 applicants who will build future farming concepts. So far 15 winners will get extra farms, representing a value of NOK 10.7 billion in so-called development permits.

“This is a gigantic experiment that one holds from the authorities,” says Professor Ragnar Tveterås at the University of Stavanger according to the Norwegian business daily Dagens Næringsliv. He believes the authorities have been overwhelmed by the interest and the value increase on farming concepts.

State Secretary Roy Angelvik in the Ministry of Food and Fisheries acknowledges that the valuation of development permits may have been too low at the beginning.

Among the many who have been rejected by the Directorate of Fisheries is Ocean Aquafarms. Chairman of the company Board, Heidi Baugstø, has appealed to the ministry.
“I hope and believe that we get permission,” says Baugstø.